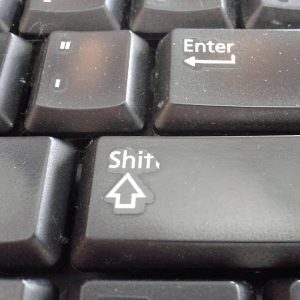 A few years ago I was working through a large code base, wheedling my way through a 900 line function in a 3,000 line file of legacy procedural code, put my head in my hands in frustration and stared down at the keyboard. Over the years of beating up a code base that was difficult to read and even more difficult to reason about, I’d seen the Shift key had been worn off to express exactly what I was feeling. I had to laugh, the rest of the day went a lot better.

In this post I’m going to discuss (most of) the Extended Coding Style Guide as it relates to code legibility and general formatting and how it helps me address the Big Ball of Mud. I’m going to intentionally skip a lot of the recommendations to stick to the topic, how adhering to standards improves the legibility of my code and in the long run makes me a (little?) better coder. It has helped me to start thinking differently about how I code to improve both legibility and coding skills. The inset quote says it better than I ever could.

The intent of this specification is to reduce cognitive friction when scanning code from different authors. It does so by enumerating a shared set of rules and expectations about how to format PHP code.

Have a look at this "before" code . I put it together as an example of how we can take loosely formatted PHP code and improve legibility. (I hope it gave you a chuckle!) There are a bazillion things wrong with this code and doesn’t do anything useful, but we’re going to refactor it to demonstrate how it makes the code more legible and maintainable in the long run.

What is so bad about it? It works and runs (see it here,) it even validates, so what’s the problem? There are many, but were going to stick to the topic, only meandering a little for other improvements.

Here is the list of items I’ll address with this code, and quotes from the PSR’s:

Here is the final revised code after applying PSR standards and (quite) a few other changes (that I’m sure you don’t want me to ramble about.) It still has quite a few issues and could stand more extraction, and is still useless, but you can see here it’s the same as the original with a few textual changes due to flexibility of the refactor. Also contrary to my statements about comments in Down the Rabbit Hole, the comments are more verbose due to the context of this article. Aside from coding to standards the directives applied,

Which would you rather maintain?

If the Functionality is the Same, Why Bother?

If the front end is the same and it doesn’t change our visits or sales, what benefit does it have? Simply put, a business has to look at the costs and long-term ROI of the training curve and code base maintenance. Developers today have cut their teeth on the Gang of Four and are well versed in standards and frameworks written to them. They can jump right into a Laravel, Drupal, or Symphony framework and be immediately productive. With many legacy code bases, figuring out how all the moving parts fit together can take months.

Too often refactoring or reformatting a code base is considered an all-or-nothing task, it doesn’t have to be that way. It also doesn’t have to break the application or the company bank, or create more work in code reviews. (Aside: time budget for format/whitespace only pull/merge requests.) The reduced training curve and less long term maintenance will more than pay for itself.

* You can always hide white space changes when reviewing code, but when you start seeing this it is a team management issue that should be addressed.